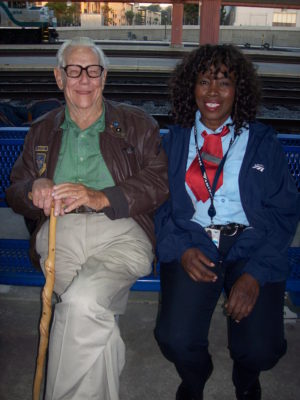 I would like to acknowledge and thank a magnificent woman who went beyond her job description and responsibilities to protect our 90-year-old dad. I call her his guardian angel because she saw he needed one and took him under her wing. Alecia deserves a hero’s metal for the care she gave our dad those two days he was under her wing.

Alecia Turner, based in Los Angeles, works as an attendant on the Amtrak sleeper car out of San Antonio. She was working the trip that left Fort Worth, Texas on Wednesday September 10, 2014; the trip dad was taking to come and see me in Portland, Oregon.

In San Antonio, the Texas Eagle unhooks the sleeper cars in preparation for the Sunset Limited to pick up for the trip to Los Angeles. This all happens in the middle of the night. In the process of hooking up there is a lot of noise and jarring of the train. This activity woke up dad who became confused not knowing where he was or what was happening. His first thought was to get off the train but the train was moving.

Alecia was able to keep him from getting the doors open and got him back to his room. From that time forward, she became his friend and guardian. She called me that night to alert me there was a problem and gave her opinion that a man that age should not be traveling alone. Everyone agreed except dad, as far as he was concerned, no one was going to tell him what he could or could not do. Before the trip I told him I would fly to Fort Worth and ride the train with him but he wanted to do it by himself and told me no.

When Alecia and I finally talked, she asked if someone could meet him in Los Angeles because she did not feel he would be safe or watched over on the next leg of his trip. She said if it were her dad, she would be there.

I immediately scheduled a flight and got to Union Station in LA at midnight. She tried to get me a room at the station to sleep in, however it was 9/11, and it was difficult to get special favors. I waited in the waiting room but did not sleep because Alecia and I were in constant contact all night long. She could not get him to sleep more than 10 minutes at a time. One time he called me to say the train was stranded due to a storm. He did not know when they would get there. Alecia sent me a text saying there was no storm. 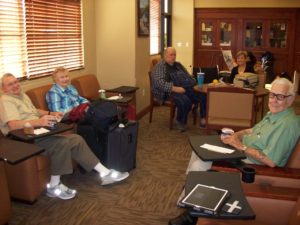 During the day, she had the privilege of hearing every one of his many stories and they fascinated her. He had a lot of them as a veteran of three wars; World War II, Korea and Vietnam. He started his career just weeks before the bombing of Pearl Harbor. He showed her the decorations on his bomber jacket and explained each one. With little sleep over the next thirty hours, she managed to get away for a quick shower and change of uniform. Jane & Gary Creecy and Lois & Ron Borst, two couples in the same sleeper car, became his friends and helped to keep him away from the doors on the moving train. After I connected with dad in Los Angeles on Friday, I had the privilege of meeting them in the VIP lounge while waiting for our connection north to Portland. They were wonderful people and very concerned about dad.

The story has a sad ending though. It became obvious to me rather quickly after The Coast Starlight left LA that dad’s dementia had become more serious since I last saw him in April at his 90th birthday party. As the train proceeded up the California Coastline, he was confused and concerned and told me I was too close to the edge. He said we should be on that freeway across the way. He was convinced that we were going in circles and pointed out trees he had seen earlier. I kept reminding him we were on a train and pointed out the setting sun in the west to convince him we were traveling straight north.

The worse was yet to come. When we got into bed and I turned out the light, he started to complain about the train being in motion and pulled back the curtain to announce it was dark. He insisted the train should stop before it ran head on into another train and kill us all. Finally, he shouted in the hallway of the sleeping car there was a bomb on the train.

The train personnel called the emergency responders in San Jose and they took us off the train. Once off the train, it was as if someone had flipped a switch; he was back to himself and able to answer their questions. He knew the year and the president, his date of birth and social security number. He rattled them off without hesitation. In the emergency room, he kidded around with all his caregivers. After all the testing came back negative, they were unable to determine what was wrong with him. Then something flipped that switch and he became incapacitated once again. He was combative, even swearing some, but once calmed down, he slept all of the next day. It appeared he was getting better; the physical therapist had him sit on the side of the bed and even had him on his feet. He was still unable to talk but the nurse assistant and I each held his hand and talked to him. Dad died peacefully in his room Sunday night when he just stopped breathing.

Dad did not make it to Portland Oregon for a last visit but he died doing what he enjoyed most, traveling. It was because of Alecia I was with him when he died and I will be forever grateful to her.